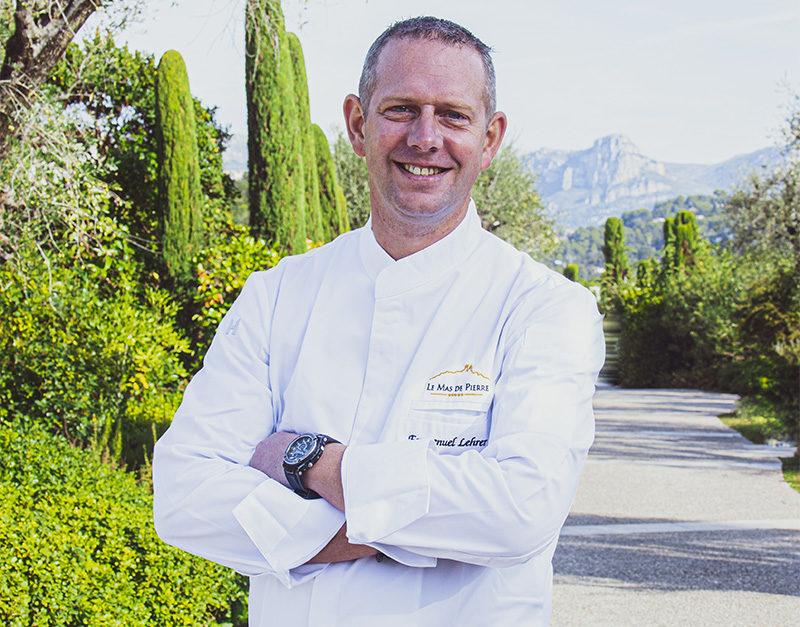 Born in Alsace, Emmanuel Lehrer attended the culinary and hospitality school in Strasbourg. Following his studies, he worked a full year under Hubert Maetz, a renowned Alsatian chef.

To broaden his culinary horizons, he went to Switzerland to work with Didier De Courten, a Michelin 2-star studded chef. Then, two years later, seeking a change in scenery and temperature, he took off for Saint-Barthélemy.
There he got a taste for the luxury industry by working in hotels such as: Rosewood Le Guanahani ****, François Plantation**** and Le Séreno****He then went on to Verbier in Switzerland, and finally to his native country in Carcassonne and Paris.
He also participated in the opening of Le Méridien restaurants alongside Michel Rostang in Dubai, Vienna and Milan.

In 2003, as he just turned 25, he obtained his first position as Chef at Le Méridien Beach Plaza.

In 2009, the Relais Châteaux du Mas de Pierre proudly welcomed him as Head Chef.
Searching for his culinary identity for a long time, the flavours of the South triggered the inspiration he was looking for.
Mediterranean cuisine, with Provençal flavours and delicious sun-kissed produce, became his signature.

Three keywords best describe his culinary creations:
produce, season and taste. The restaurant endeavours to be locavore and organic.
Following the requirements of the Ecolabel certification, the Chef's kitchen is respectful of the environment and seasons, and works in short circuits with local producers.

Today, he is eager to take on the new challenge ahead of him. Now 42 years young, he is the Executive Chef of Domaine du Mas de Pierre with its many original restaurant facilities.

• The gastronomic restaurant, La Table de Pierre, featuring a delightful 14-seat table d'hôte and a view of the open kitchen.

• Completely revamped, Bistrot Lis Orto sits by the pool and enjoys a view of the open kitchen.